In the second of a two-part investigation into the TGA’s handling of medicinal cannabis advertising complaints, Cannabiz editor-at-large Rhys Cohen analyses the body’s own data to explore how effective its procedures are and suggests industry self-regulation may be the best way forward.

In last week’s first instalment of this story, I claimed that of a sample of 96 medicinal cannabis advertising complaints completed since 2018, the TGA missed their time-to-action performance target in more than 50% of cases.

This is how I arrived at that conclusion:

The data I’m relying on here is a combination of the TGA’s own online database of advertising compliance cases, a Freedom of Information (FOI) request I submitted, and the 2019-20 annual report I mentioned (unfortunately the 2018-19 annual report has only a single, passing mention of medicinal cannabis).

It is worth explaining how I have pieced these sources together.

First of all, the TGA does not release any case-level details regarding complaints that have not yet been completed, which is understandable.

When I first approached the TGA about advertising, I was directed to the online database of completed cases. As it turns out, when the TGA completes low-risk complaints, it does not bother reporting any information on the nature of the complaint in the public database. So from the database, it is impossible to identify which low-risk complaints were regarding medicinal cannabis.

And although a search of the database for ‘cannabis’ brings up a list of medium-risk complaints, it is possible (data collection being an inexact science) that this list is incomplete or incorrect.

The FOI data is more useful. But frustratingly, due to different data on complaints being stored by the TGA across multiple IT systems, it was determined that my initial request for comprehensive information on all completed medicinal cannabis complaints would be too difficult to produce.

Instead, I was provided with data on complaints raised since July 1 2018, and which had been completed as of September 21 2020 (when I first requested the data), and which were stored together in the same Advertising Management System.

A total of 86 out of 202 completed complaints. No more than a few sentences of explanation per entry, and sometimes a lot less than that. I paid $228 and the process took 49 days.

Then there’s the annual report covering the financial year 2019-20 which explains the TGA’s target timeframes for actioning and completing complaints, and shows how well the TGA met those targets across all complaint types (not just medicinal cannabis).

Here’s how they did: 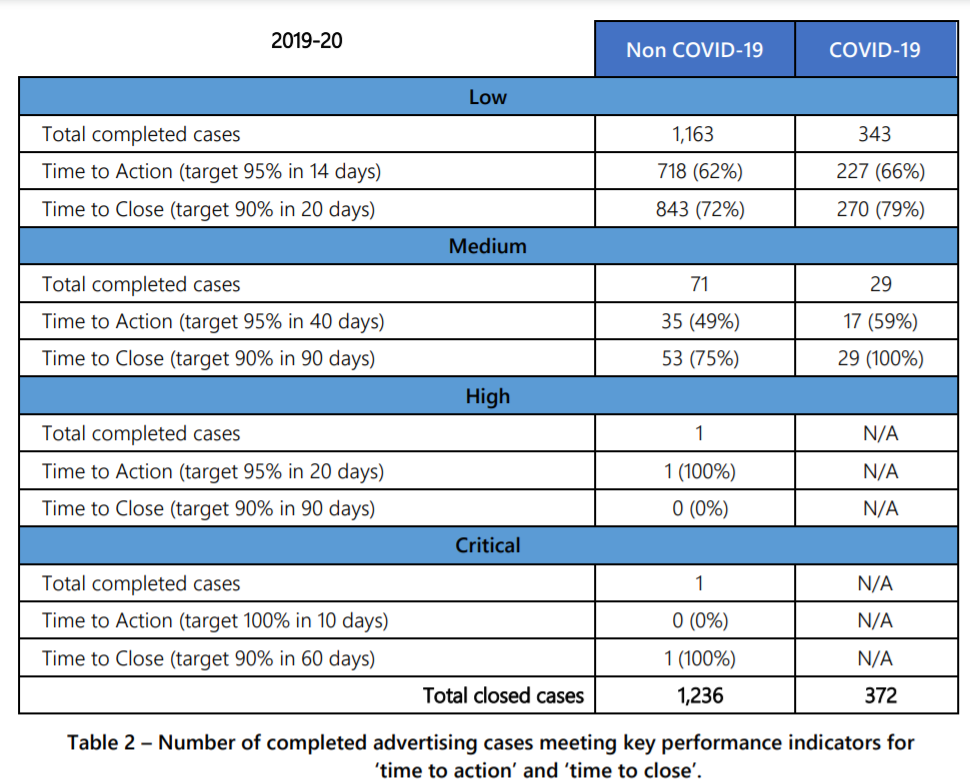 Given the TGA has failed to meet most of its performance targets, even for the handling of COVID-19 complaints, it should not be surprising that some medicinal cannabis complaints have slipped through the cracks. The advertising compliance section is clearly in need of additional resources.

I wanted to produce my own version of this ‘report card’ just for medicinal cannabis complaints over the same time period, to make a fair comparison.

So, to summarise the medicinal cannabis-specific data, we have:

Based on these partial figures, here is what we get for complaints about medicinal cannabis:

It seems that for low-risk cases, time-to-action and time-to-close performance for medicinal cannabis complaints are not much different from the average. Not so for medium-risk complaints.

And this representation of the data obscures the surprising number of complaints that took many months to action, let alone complete. Of the 12 medium cases completed in FY 2019-20, three took more than a full calendar year before being actioned.

But that’s only the (somewhat random and partial) picture of those complaints that have been completed. And the TGA tells us there are at least (as of mid-September 2020) 243 outstanding complaints, with more coming every day.

So what’s going on behind closed doors?

Along with the FOI data I received from the TGA was an explanation of their approach to regulating medicinal cannabis advertising. According to that document, the TGA has already “engaged with all clinics and pharmacies”.

It seems likely that the majority of the better-known clinics and pharmacies are currently in ongoing dialogue with the TGA about outstanding advertising compliance issues. And few of those cases seem to have been completed so far.

This can be a long, drawn-out process that in many cases has already spanned months. And, depending on the company in question, has produced varied outcomes to date.

Many clinics underwent name changes earlier this year to remove explicit references to cannabis. Some have done extensive re-working of their web content and blogs to move closer towards compliance. Others continue to actively promote unapproved drugs to consumers on their websites and social media.

Then there are the product companies, who for the most part have picked up their game on advertising compliance. However, there remain a number of well-known companies with obvious outstanding (and, in some cases, longstanding) breaches which have not been resolved. I expect many of these companies are also in ongoing negotiations with the TGA.

Until these cases are resolved, it will not be possible to get a clear picture of how vigorously and consistently the TGA is enforcing their interpretation of advertising compliance.

And, until it is demonstrated that violating these rules carries some kind of meaningful penalty, there will be little incentive for companies to be the first ones to put their gun down, so to speak.

Gun is an appropriate metaphor here as advertising complaints are becoming increasingly weaponised. Companies will gladly monitor their competitors for the opportunity to report advertising breaches. Even (or especially) if they themselves are guilty of similar violations. Unfortunately there is no law against hypocrisy.

But for guidelines to be effective, they must first be clear.

And in my opinion there is still too much confusion around what is permitted and what is not. Not to mention some of the clearer directions being inconsistent with each other.

For example, the TGA has acknowledged they “want people to know [medicinal cannabis] clinics exist so people can go if they want medical advice”. And they apparently allow clinics to use the word ‘cannabis’ on their websites, but have determined that having ‘cannabis’ in a business name is promotional and therefore not permitted. Why draw the line there?

According to Dr Teresa Nicoletti, a leading lawyer specialising in the regulation of medicinal cannabis, this has created some confusion around the application of the guidelines:

“On one hand, the TGA says it permits the use of the phrase ‘medicinal cannabis’ on a website. But on the other hand, Section 42DL(10) of the Act provides that it is an offence for an advertisement to refer to substances, or goods containing substances, in Schedule 3, 4, or 8 of the Poisons Standard.

“Then there is a further important distinction regarding how a reference to ‘medicinal cannabis’ on a website is characterised: is it in the context of education, a prescribing service or is it promoting the use or supply of therapeutic goods? The former two are permissible, but the latter is not.”

The core purpose of any company website or social media presence is promotion. In what context could a product company or clinic use the phrase ‘medicinal cannabis’ online in a way that does not promote the use or supply of medicinal cannabis? And if that is the case, is it reasonable or desirable to maintain this restriction?

For guidelines to be effective, they must also be consistent over time.

Although I have not had the opportunity or time to verify these claims (so treat this as well-intentioned gossip), a number of people have confided in me that what was permitted by the TGA one month has become an issue the next. Some of that is bound to happen when rules must be interpreted and applied on a case-by-case basis, but this variation should be tightly limited.

The nature and extent of these possible inconsistencies is further hidden due to companies – understandably – keeping their cards close to their chest. No-one wants their competitors to know that they have been issued with a cease and desist letter. No-one wants to put a spotlight on their own alleged non-compliance. But if people do not compare notes, it will be impossible to verify if the guidelines really are being interpreted consistently.

And lastly, guidelines must also be fairly enforced.

The TGA expects everyone to adhere to the rules, and I am not implying that it unfairly targets one company over another. The TGA does not play favourites. But when conversations about breaches and enforcement all happen behind closed doors and no-one knows who is being pursued for what, or when they will fall into line, it is easy for people to feel they are being unfairly targeted.

This situation isn’t going to magically resolve itself. There are simply too many grey areas and too many bad actors. And the regulator, once again, obviously lacks the funds to do much about it. Déjà vu, anyone?

The only hope we have is for some kind of industry self-regulation. What that might look like I have no idea. But the first step is transparent communication. Companies need to start talking to each other, not just to their lawyers.

Let us hope that making medicinal cannabis an advertising compliance priority area means the TGA will have the resources it needs to thoroughly assess, clearly communicate, and firmly and uniformly enforce the rules.

And let us also hope this is not achieved at the expense of some other equally important, but less political, class of therapeutic goods.